Three Things Thursday: Is Flunning really the new way to a Runner's High?

He: *sees girl running in front of him. Ponytail following the rhytm of her pace. Short boy shorts and a tank top. Singing along with her Ipod*

He: *picks up his pace to catch up with her*

He: *running beside her now, at her pace*

She: *smiles seductively, flashing her eyelashes, turns off her Ipod* Hi... *absolutely no drop of sweat on her*

He: Do you run here often?

He: What a coincidence, I run here every week! And your shape...couldn't be better... *winks and smiles in a manly way, checking her out*

She: *flips her ponytail back and smiles seductively again* Really? Well, thank you... You're quite the looker yourself too... *winks*

He: *looks at her, dreamy eyes*

She: *looks at him in full admiration*

The sun sets and the newbie couple runs off together... 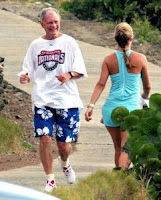 Let's talk numbers:
- 24% of all runners say that getting a date/flirting (and not to lose weight, get into shape, etc.) is the main reason for them to get out there for a run. That's right: 24%. That's 1 in 4 runners.
- 36% of all runners has had at least one flirty conversation while running. That's 1 in 3 runners.
- 10% of all male runners and 5% of all female runners think about sex while running. There are at least 10 guys in my running group, so that would mean that during practice at least one of them is thinking about... Well, you know what I mean. Enough said.

OK, I get it, flunning is hip, for the popular kids, something you must give a try. But is flunning something I would like to give a go?

Well, it sounds like fun and at least you already know that you have something in common. But then again...am I capable of flunning my ass off like I was born to do it? Taken into account that I have the romantic and dating skills of a 3-year old (the 3-year old would probably beat me at it), it might get embarrassing (and probably funny to look at).

3. Well, that said, let's see what that same flunning-date would look like with my silly little self as the female party.

He: *sees girl running in front of him. Ponytail following the rhytm of her pace. Runningskirt and tank top. Pumping her arms up in the air to the beat of her Ipod. Another girl, runningbuddy, running beside her. Laughing at moves of girl. Sweat dripping from girl's head.*
He: *picks up his pace to catch up with her*
He: *running beside her now, at her pace*
He: Hi!
She: *slightly disturbed look on her face, frowning* Hi...Can I help you with something? Are you lost? *starts singing along with her Ipod*
He: *looks confused* Well, no, I just wanted to say 'Hi'...Do you run here often? *smiles*
She: Huh? Yeah, I do. *burps, runningbuddy giggles* Sorry, that's the GU talking... *smiles*
He: Oh, that's alright. *clearly doesn't know what to think and it's clearly not alright* What a coincidence...I run here every...
She: Bye! We have to take a right here; happy running! *runs off chatting with runningbuddy*
He: *looks confused and shakes his head. Runs off alone*
Runningbuddy: That guy was flirting with you...didn't you notice that. He was trying to ask you out. You are strange...
She: What? No! Oh, sh*t........
OK, you can stop laughing at me now; this could really happen to me. No kidding. What can I say...when I'm running, I'm running. But, on my next run, I will give this flunning thing a go. Promise! Who knows what might happen? ;)
Question: Have you ever played flirty flirt with someone while out on a run? Or has someone tried to make a pass at you while running?
Ran: 6.3 miles / 10 km - 55 minutes - temporun with dogs
Placed by Silly Girl Running on 8/26/2010 05:31:00 AM

Email ThisBlogThis!Share to TwitterShare to FacebookShare to Pinterest
Labels: flunning, i don't get this, reasons why i run, running

LMAO!!! That would be me too! Spike tried to pace me in a race once and said I have the meanest race face ever! But I'm far friendlier during training runs where I'm not killing myself to run sub 7's!

I'll admit, I check out the better looking guys for some eye candy.

That's so funny! I don't see a lot of runners when I'm out at 5 a.m. I guess I'm the only crazy one around here.

@ Jess: Hahahaha! Tried that on yesterday's run, and it wasn't so bad! But looking at them is one thing... Flirting would be a lot harder (when I'm trying to keep my pace). ;)

@ Morgan: Hahahaha! Mean race face! Yep, that's me too...The only race pics that are sort of OK are the ones where I spotted the photographer and forced myself to smile. :)

LOL!! I met my boyfriend at the gym... he is not a runner, but the first time he talked to me he got on the treadmill next to me and almost died trying to keep up with me for 2 miles. Hilarious... :D