Did you ever hit the road for an Angry Run?

You know, the run you have when you're really pissed off about something or angry angry angry with someone? The run that get's all the anger out? That's the run I mean. 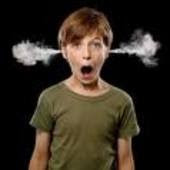 Last Tuesday I had one of those Angry Runs. I was completely pissed off about something (I will spare you the details...). 'Ready to punch someone' pissed off. But I figured punching someone wasn't really an option (not exactly worth going to jail for...), so I went out there for my scheduled run instead. And totally killed it! I was supposed to do an easy 5 mile run. Instead I kicked it into gear and just went for it. After two miles I felt a bit better and got into an easier pace.
And the best thing: after my Angry Run, all the anger was gone. I wasn't angry anymore...at all. Peace and quiet. Total serenity. Ohmmmmmmmm...
Who needs therapy (or anger management classes for that matter) when the road is open for an Angry Run?
I already posted this question on my Facebook-page, but I would like to know what you think!
Did you ever hit the road for an Angry Run? When is the last time you went out there for an Angry Run? Do Angry Runs work for you (to get the anger out)?
Placed by Silly Girl Running on 9/10/2010 04:01:00 AM

Ha! So funny you posted this today. I had an angry run last night. 10 miles flew. Felt much better afterwards!

Yes! Can't really remember the last one, but the angriest one was a year or so ago. They go by fast, and then you're much, much better.

I've had a few of those angry runs...