I'm not the girl to break a promise. So, as a bonus post for today: 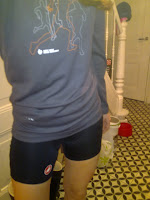 The front looks like short tights you could wear for running, right? Nothing weird about the shorts so far. 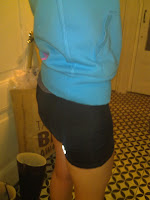 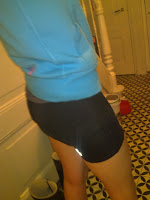 And there's the crotch pad. These shorts are a godsend for obvious reasons (no more 'butt blisters'), but somehow they do give you the feeling of wearing diapers for the first 5 minutes you have them on. On the other hand, these shorts do make my butt look more like JLO's than it normally does ('cause normally my butt looks as flat as the country I life in...). 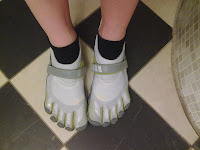 Ofcourse I had to pair the shorts with these. What else would you wear for gym cycling? 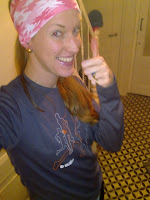 That's how excited I was about hitting the bike. And about all the cross-training I'll have to do because of this stupid foot. More on what the second opinion MD said later.
Placed by Silly Girl Running on 1/12/2011 01:00:00 AM

Make sure you buy good biking shorts. You get what you pay for. If you get a cheap pair your JLO will hurt.

Bonnie has a paid of baby blue running Vibrums. I call them her Smurf feet. A guy a work wears a black pair with his dress clothes. It looks really funny. People love them.

Get a good pair of tri pants for your spring. The moisturizer in them is smaller and thinner but you can wear them while swimming without getting the wet diaper look.

My husband and I were going to do the Del-Mac which is a couple day bike ride from East Lansing Michigan to Mackinac City. I was so scared about the booty issue so I decided to sign up for my first Marathon instead. Its still on my todo list, just my Marathon bug is a little stronger! Good luck breaking those babies in!

@ Kevin: Ha! You made me laugh out loud: my boss even asked what was up...hmmm. ;) I'm already shopping around for a tri-suit. Being me, it needs to be girly. ;)

@ Bethany+Ruan: Thanks! The foot is still sucktastic... :(