As promised, the Eco-Trail de Paris Recap and Photos. Mostly photos. Since I took a bunch of them. And they kind of say it all. :) Boy, did I have fun at this race. :)
83-ish K / 52-ish miles and 1,500 meters / 4,900 ft elevation gain. Trails for most of the course. Finish line ON the Eiffel Tower. Could I have asked for more? Nope. :)
As said earlier today here I planned on approaching this race as an 'ultra tourist'. I'd had a crazy busy week at work and didn't sleep too well the nights before. I needed a relaxed fun run. Planned on taking lots and lots of pictures, treating the aid stations as a buffet, and soaking in every single mile of this race. :) And that's exactly what I did. I soaked in every inch of this race. :) The running gods must have been with me last Saturday - I had a blast. :)

The signs that would lead the way.

Saturday March 24th 2012. 12 PM. Toeing the start line. Temps were up (le sigh...), sun was burning on my scalp. After a short briefing, we were ready to go. Woo Hoo! :) I had been looking forward to this race for monts...and now I was finally getting ready to cross that start line.
My dear Mom was sweet enough to join me for this race and drove me to the start line. Cheered me on with her dog Diddy. :) And took these pics when I spotted them right after the start.

First, we ran a loop through a park. Pretty crowded, but nice trails. :)

Uhm...yeah...no freaking clue what I was doing here.

Running a 50 miler AND working on your tan? That's how it's done Silly Girl Running Style...

We entered the first aid station after 22K /14 miles. Mom was waiting for me there, so I chatted with her for a bit, refilled my pack, had some energy gel and drank a bottle of Coca Cola (yep...). There was a hilly / steep climbs part coming up after this, so I took some time to refuel. :) Especially since the next aid station (water only) would be at 45K / 27 miles. 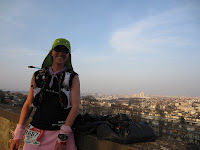 A nice lady was sweet enough to take my photo right after the 45K/27 mile aid station. Can you spot the Eiffel Tower in the back? I could not stop smiling at this point in the race. :)

I suck at taking self portraits. Just saying. :) 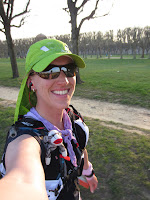 After the 45K aid station, I ran into a nice French guy named Patrick and ended up chatting with him for the rest of the race. At the 55K / 33 mile aid station (on top of a hill :)) we refueled and had some noodle soup. Best. Soup. Ever. Especially since my tummy wasn't a huge fan of the heat / GU combo. Since the race started at 12 PM and I would end up finishing this race in the night time, I changed my shirt for a short sleeve (I could make a long sleeve out of it with the arm sleeves I was wearing), and took out my head lamp. It would probably be dark before I'd make it to the next aid station, so I figured it would be better to take care of that before I'd stumble over some sort of tree trunk. Uh-huh. :)

67K in. Last aid station before the Eiffel Tower Finish line. Before the start of the race I was pretty worried about the night time running, but ended up loving it. :) After the 67K /42 miles aid station there was a short down hill, and after that we were following the Seine River to the Eiffel Tower. :) 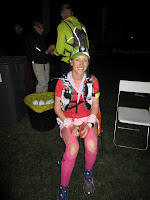 Yep, I suck at taking self portraits. :) 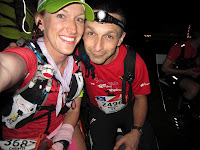 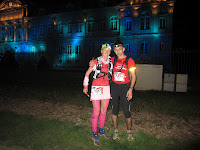 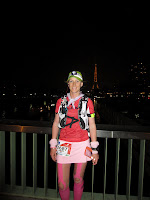 Insert Eiffel Tower photo shoot. Ha! How cool are the blinking lights? Seriously, how cool is that? :) 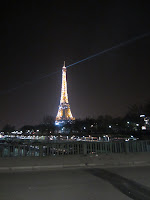 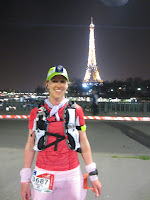 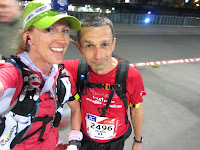 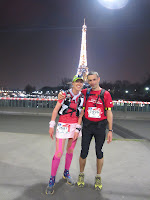 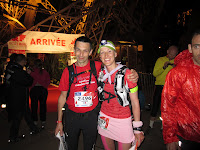 Not too shabby, huh?

The day after. Bringing sexy back in my compression socks. Wearing the race shirt, a size small, which ended up being more like a size XXXX-large. Yeah...

Despite of the fact that I actually felt okay, somehow walking down steps was less funny...

Looks beautiful! Thanks for sharing the pictures!

Amazing - very cool pics, and I am still flabbergasted at the distances you rack up. Way to go!

Look like a beautiful 50 miler! I love that last photo of you. You look so happy!

It's was very pleasant to run with you this great race. See you at Paris Marathon.

Had no idea you guys finished ON the Eiffel Tower, and in the dark!!! I was already in bed with ice on my knees by then (I was one of the newbies running the 18k route). You're an inspiration, love the socks! :-)

WOW! How do you even wrap your mind around a 50 MILE run?

Thanks for the review, I came across this when looking for info as I try & decide whether to enter this race, think I am going to go for it as it sounds good!

Good report. I'm doing the race this year....any tips? How can my girlfriend follow the race? Is it easy for her to get to different aid stations?