Hello Running Gods: are you trying to tell me something?

The Hip is pretty much okay at the moment. Lots of stretching and icing after long runs did the trick. (knock on wood, though...)

So why do I feel that the Running Gods are trying to tell me something when The Hip is much better? Well...

I ran the Köln Half Marathon this weekend (in Germany). Köln is a beautiful city and only a 2-hour drive away from my hometown in Holland. And the course is great; not a fast course. Not an easy course. But it is definitely a great course! Wow! It loops through the city, so what you get is a sightseeing tour of Köln. Much better than the somewhat boring rural areas you normally get. And the way the race crew organized it; wow! It's a very well organized race. They even had people removing the leaves so you wouldn't slip on them.
My plan was to run this race somewhere between marathon pace and half marathon pace, so I was aiming for something around 1:50. And for the first 5K or so, I was pretty much doing okay. And then, all of a sudden, my right knee started feeling a bit stiff. I figured that it would go away. It didn't. By the time I got to the 10K mark the knee felt sore and it hurt - big time. Bending it caused a sharp shooting pain behind my knee cap. I wanted to drop out, but decided to lower my pace instead. The pain was still there, but at around the 10 mile mark I was in a little less pain. Running at a slower pace actually didn't feel that bad. Painful, though.The rest of my body was feeling great. No soreness at all! But this knee... I considered dropping out again, but decided against it. I'm lazy and didn't want to go through the trouble of finding a cab that would take me to my check bag. I figured I would be there faster when I just continued running. So, I did and finished in an embarassing (for me) 1:52:30. 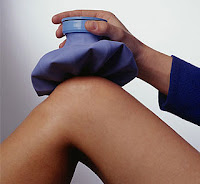 After the finishline I got some ice from the paramedics waiting for us. It helped a bit and walking around didn't really hurt. Going down stairs did, but walking didn't. I had high hopes that it wasn't anything serious.
These high hopes were crushed this morning when I woke up. Bending my knee causes a sharp shooting pain behind the knee cap. Just walking around hurts. Riding my bike is not even an option. Touching my knee cap hurts. Googling the syptoms brings me to lots and lots of different articles on Runner's Knee, patella pain, and not being able to run for a couple of months. Silly me for thinking that Runner's Knee was an overuse injury and not an acute injury. My PT is on it, and told me to rest it for at least this week.
Oh, and ofcourse the New York Marathon is in less than 5 weeks. And this week and next week are supposed to be 50 mile weeks with 20 and 22 mile long runs. Followed by three weeks of tapering. How am I ever going to be able to run the New York Marathon with Runner's Knee? And what to do about my training?
So, hello Running Gods: are you trying to tell me that I shouldn't run the New York Marathon?
Have you ever dealt with a severe injury with a marathon waiting for you just a couple of weeks later?
Placed by Silly Girl Running on 10/04/2010 05:00:00 AM

Dont give up on NYC yet you still have lots of time to recover. If you loss some training time you may not be able to run it as fast as you want but hopefully you will still be able to run it... good luck

I think 1:52 is amazing, great job! I really hope your knee feels better. I know the frustration you are going through all too well.

A 1:52 is good! - better than a DNF. And one week off now to get your knee sorted out won't affect your marathon goals overly. Hope all goes well.

@ Becka: Thanks. Be prepared to read a lot of frustrated blog post in the next couple of weeks. ;) The frustration is killing me!

@ Chris: I really hope that I will at least be able to run it.