Fas.ti.nis.ta woman who likes to look stylish when she runs.

Ahhh....that would make me a fastinista, right? Well...maybe in the US it would, but the Dutch idea of a Fastinista seems to be slightly different.

Recently a fellow runner explained to me what the Dutch idea of a fastinista is. Then another one gave me the exact same criteria. As did the next one, etcetera. It comes down to this:

- woman who likes to look stylish when she runs...and:

- has at least two kids;

- sticks to ladies only races;

- likes her make-up to be perfect throughout the race;

- won't even think of running up and down a mountain.

Okay...I guess I won't have to make you guess about my answer on this one. There was some swearing involved. Alright...a lot of swearing. These guys/girls are obviously morrons. Plus, I don't really care whether or not I qualify as a fastinista under these 'Dutch criteria'. But still...it made me wonder...

Bad.ass.ti.nis.ta woman who likes to look stylish when she runs - preferably up and down a mountain, while kicking ass. Picks trail running over road running any day of the week. Does not mind getting dirty. She does not mind at all.

Dumdadumdum...try not to feel the freezing temps... 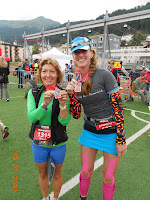 Wendy managed to qualify for the NYC Marathon without even trying to do so. Qualified. Yep. :) 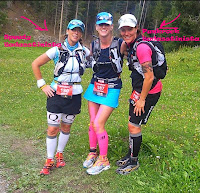 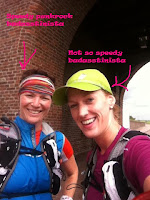 Now if only I could get Ron to work with me on some kick-ass shirts for our 'movement'. ;) 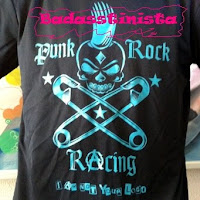 Email ThisBlogThis!Share to TwitterShare to FacebookShare to Pinterest
Labels: Badasstinista

Ha! I only fit the first two criteria in the Dutch version!

I like badasstinista - That's my new go to term!

I've been known to color-coordinate my outfits, and I have no grudge against anyone who wants to look nice. But there's a difference between nice clothes and stressing about perfect lipstick in race photos. IMHO a runner "worried" about what she looks like is not running hard enough. ;)

Hence: Badasstinista is MUCH better!

Totally love the concept, hope I will qualify for it :) We should make "Badassinista" t-shirts for NYC!!! :)

cool! Well, you're a Badasstinista for sure!

"Fastinista Schmastinista" is that another dirty Dutch word I can not say infront of my Dutch grandmother?