Last week was a 'high'-ish mileage week in the whole ultra training / summer plans thingie, so last weekend called for some long long runs. Part of one of those long runs (I did some extra miles before the start of the marathon) was the Slachtemarathon (Friesland, the Netherlands) on Saturday. The race only takes place ones every four years, so it's quite a special one.

John had forced me into this one kindly requested whether I would like to participate. So, about two months ago I'd clicked the 'register' button. I wasn't too excited about this one, since (i) I'm not a fan of Friesland (don't even ask...and yes, it has something to do with that bum hole that is my father), and (ii) it had a 6:30 AM start, and I would have to spend the night before the race up there. I know, really nothing to complain about.

Boy, was I wrong. Not only did last weekend's experience erase every negative thought I'd had about Friesland (thanks to the lovely bed and breakfast we'd booked), but also did I have a blast at the marathon.

The 6:30 AM start and 4:30 AM wake-up call weren't half as bad as I'd feared they would be. Although, I did barely make it to the start line in time. After sprinting those miles to the start, I entered the corral with one minute to spare. Only to find they had decided to postpone the start - for another 10 minutes. Yay. Gave me some minutes to get that heart rate down. And to look for Laetitia. Did not manage to spot her during the race - and then found her at the finish line. Brilliant.

I'd decided to head out at 4 hour / 4:10 hour pace, because I'd planned to make a 28 mile / 45K long run out of it. Woke up with some nasty GI issues, so I'd anticipated on testing the bathrooms en-route. Ha! Good thing I was wearing denim colored shorts (www.inknburn.com). A white skirt would not have been the best choice for that day.

6:40 AM: There we go. Headed out with John and his running buddy Jeffrey. Had the first bathroom break at 3K / mile 2. The next one at 16K / mile 10. Then another one at 26-ish K / mile 16. And those weren't speedy bathroom breaks. My poor tummy. :) Apart from the GI thingie, I was feeling great. John had some issues with his ankle/calf and Jeffrey had some issues with his hip. He'd decided to speed up a bit to give him some time to spare if the hip would force him to walk. 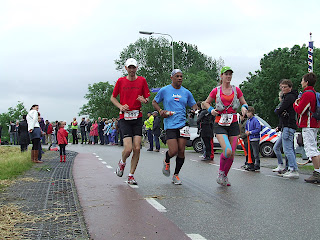 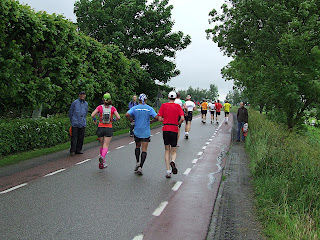 
So, from that point on - John was stuck with me. Ha! Poor him. Since I'd plugged in my iPod, I was singing along. Song after song. And I really can't sing. We did run into Carlo and Rinus, but, apparently they did not enjoy my singing and decided not to stick with us. Weird guys. ;)

Most of the course was on concrete (no kidding), but we did get to run through some muddy patches (woohoo!). Slippery muddy patches. And on one of those, John decided to take a slide for it. 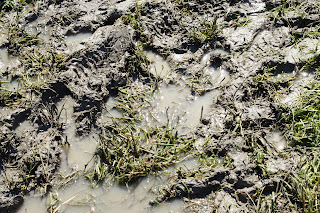 This pretty much sums it up. 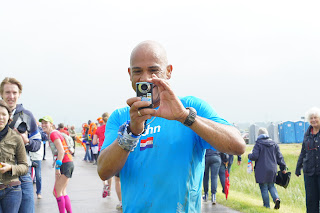 Yep, that's me in the back. Laughing at with John. This was just a couple of miles after his muddy mess accident. And I still couldn't stop laughing about it. Yes, I'm that mean. Get over it. ;) 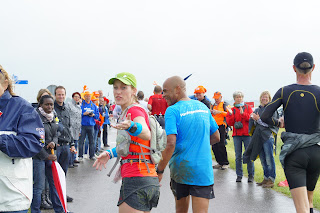 Me working my 'charming' face. I blame ultra training and strength training for those quads. Not the lean and mean look I was aiming for. ;)

With the finish line in sight I wanted to take a sprint for it. John did not approve. A simple 'Bye, bye' did the trick to make him sprint after me. :) 4:05:32 hours after crossing the start line, we'd finished this race. Taken into account that I was aiming for long run pace 4 - 4:10 hours and that I'd spent quite some time in the bathroom - not too bad for a fun run. :) Legs felt fresh enough to head out for another long run the day after this marathon. Despite of the concrete (that stuff is devilish on the ankles) Yay! :) 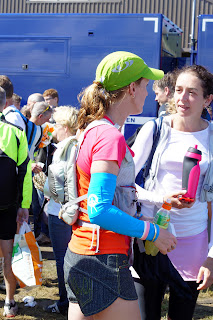 Finally found Laetitia. And she is in fact wearing a full skirt - it just looks like half of it is gone. 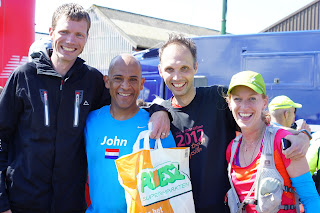 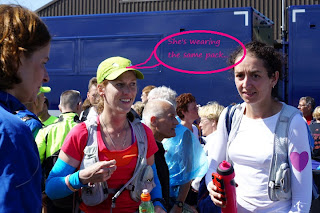 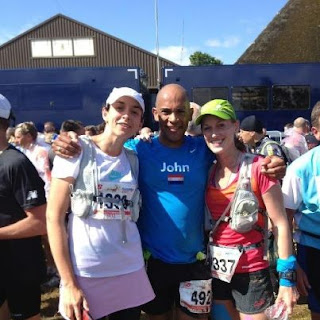 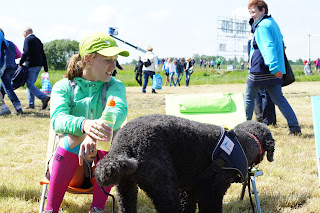 Working another one of my 'charming' looks. With Mom's service dog.

For now, I'll end this post with a pic of my butt. Pointing out - painfully clear - that the shorts modelled on www.inknburn.com aren't modelled on my butt. 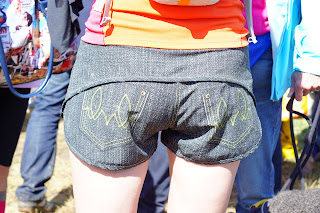 Great run! Sounds like fun was had by all, except your friend that took a slide in that muck. Were the shorts comfy?

Laetitia is not pleased with the Laetitia figuring pictures.

Laetitia needs to know she looks great in those pics, even when she makes herself believe she doesn't. ;)

Those shorts are CUTE!!

I'm pretty sure you're the only runnerd I know that could pull off those denim looking shorts! LOL!

This race report made me laugh so hard. And that picture of you just mocking in the background was awesome.

Love that you were pleasantly surprised!