As for the Amsterdam Marathon... Here we go.

Date: October 21st 2012
Where?: Amsterdam, the Netherlands
Goal #1: training run - just a fun sub-4 was what I was aiming for.
Goal #2: trick running buddy John into thinking I wanted to PR and I needed his help to do so - that way he would finish this thing. And John finishing this baby was the main goal of the day. (seriously - 3 weeks after my BQ at the Berlin Marathon, I was not going to try to PR again. Pretty hilarious that John bought the whole 'PR' story.)
Outfit: a pretty adorable Nuu Muu dress. Yeah, I can brag about this one. ;)

Let me just lead you through this year's Amsterdam Marathon photo by photo. Sounds like a plan, huh? (photo courtesy: Ans de Boer and Bjorn Paree)

The 9:30 AM start is pretty cool, since it's in the Olympic stadium. Pretty cool. John was in the corral located behind the corral I was in, so we kind of sneaked him into my corral. Yeah, that's me - living on the edge, baby.

Needless to say we elbowed our way through the first 10K. And headed out too fast. Yeah, baby. I like me some positive 'I sure did mess around' splits.

Just before the half marathon point John's wife Ans, my mom and a friend of hers were waiting for us. With fluids and energy gel. All part of the play to trick John into crossing the finish line, instead of DNF-ing at the 30K mark.

The course was less crowded at this point - holding an okay-ish pace. We hit the half way point at a relaxed 1:53-ish. 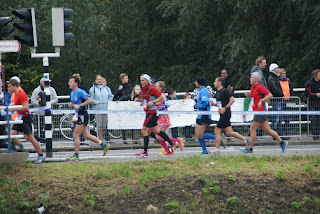 Hello Bjorn! The only guy that is able to take 'non-embarrassing' race photos of moi. And boy, did I try to mess these up. 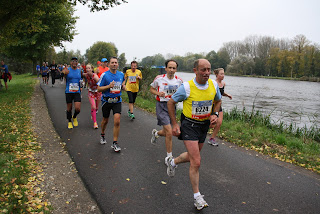 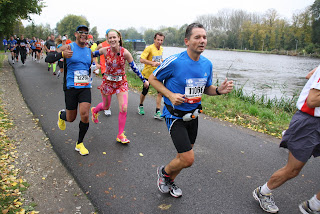 Definitely my favorite photos of the day. Marathon-photos.com - I didn't even include your overpriced crappy pics in this race report. :)

Ran into a couple of older guys talking about qualifying for Boston. With the post-BQ jitters still in place, I hopped right in. Fun talking to them - even more fun seeing them meet their goal. However, at this point John was no longer talking to me. He was suspiciously silent. At that point I realized the whole '30K point is getting closer' thing was what was going on. In the last couple of marathons (in which marathons he was on BQ-course) he had to drop out at the 30K point (cramp, tummy issues (which were caused by a parasite - yeugh!)).

A sigh of relief next to me. We had crossed the 30K mark. Good bye 30K demons. John was going to finish this baby.

Jasper was waiting for us with more fluids and energy gel. We took some time here to readjust John's compression sleeve (quad) and have some Coca Cola.

I'm a pescatarian. However, I do cheat once in a while. This happened to be the case 2 days prior to this marathon. I know I should not have red meat before a long run - it messes up my tummy. Big time. As in 'I need to throw up, but I'm trying to hold it back' messing up. Ouch. Not fun.

The Vondel Park part was fun - the part where John has a cramped up leg wasn't. A short stretching session seems to fix the problem. Meanwhile, I'm still regretting the whole 'red meat' thing. Will I ever learn?

Mom, Els and Ans are waiting for us. Right before entering the Olympic stadium to finish. 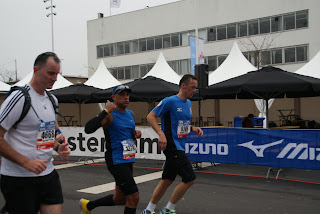 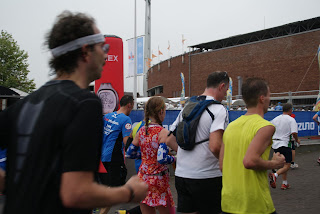 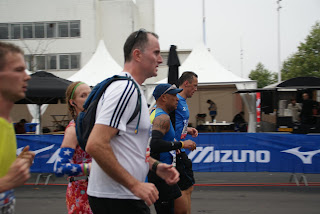 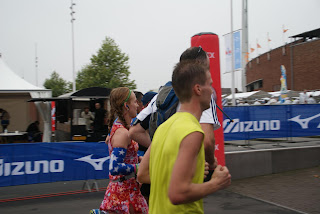 There we were. Nearing the finish line. John was going to finish this baby and had showed those DNF demons who is boss. A short sprint and...done.

Ans caught us after the finish. In our ubercharming blankets. 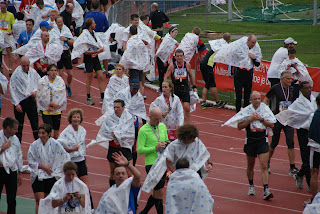 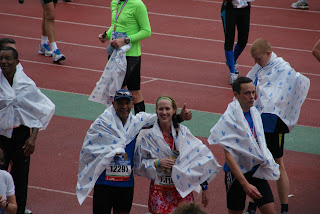 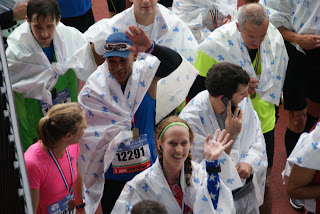 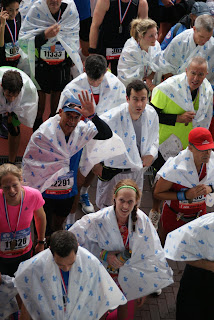 This photo pretty much sums up the day. My absolute favorite pic of this race. 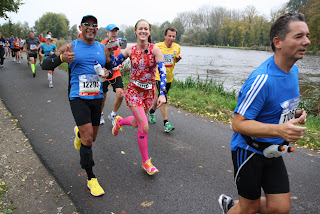 Wow this looked like a blast. I am signing on to follow all the fun here. I am stationed in Germany and I am always looking for half marathons and such in Europe. Maybe I can learn a thing or two from you. Great Race Report.

No shame to admit that you and mom tricked me. The Amsterdam marathon is definitely not my favourite but I enjoyed it and managed to finish this one with a little bit of help and tricks ;-)
Looking forward to the next one in a couple of weeks.

Great run and time for a fun race, well done! Congrats to John as well. I think I live in the only country where we don't get blankets after finishing a marathon.

Well done John!! Thinking about doing this race next year. Only have one marathon under my belt though so we'll see ;)

Love the dress and your shoes!