The race is extremely well organized, volunteers are really friendly, it's easy to get into the start area and there aren't crazy long lines to get your butt into the porta-potties. The course is nice and wide. It's a very scenic course too. Plus, you really don't notice that there are another 43,000 runners out there. The course does measure long, though, probably because of the huge avenues you run on - lots of weaving around other runners from left to right. My Garmin is usually spot on with the KM markers, but said 43K instead of the usual 42.5-ish K (I always get some extra meters in during a marathon - apparently I suck at following the blue line).

What I also loved: running into Wendy and Dieter during the race. What are the odds? :)

As for the stats: hit the half way mark after 1:45:01, and crossed the finish line after 3:32:57. Yep, that hip was definitely killing me - flared up after 11K, and got progressively worse from that point on. Then again, that BQ was well worth that sore hip. Boo Haa! I could not stop smiling for the entire week post race. How cool is that? :)

What I didn't love about this race? The photos. Oh boy, did I manage to get some ugly race photos. Wanna see? 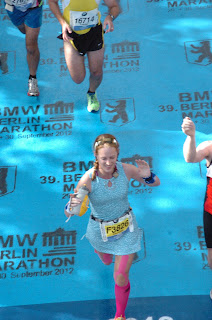 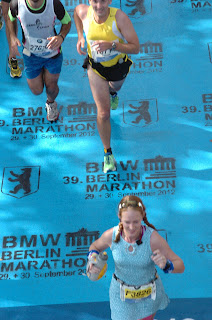 These were taken at the 36-ish K point. Could also have been 38-ish K point, though. This part of the race is a bit blurry-ish. 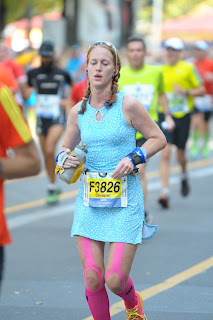 Oh yeah, this might just be the worst race pic ever. Keep those eyes open, dork! And yes, my  nose was congested to a point where I needed to open that mouth to some air into my lungs. Not the best look. Understatement of the year.

Okay, let me introduce you to the horror of the finish line pics (time on clock is gun time, not my chip time). 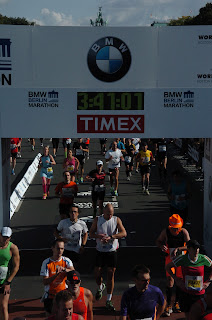 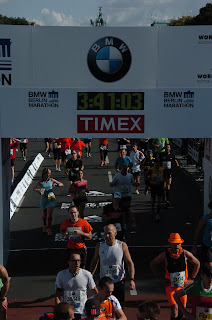 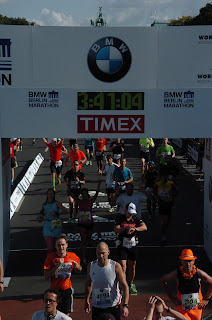 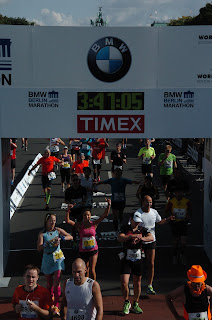 Those weren't too bad, were they? Well, let me make that up to you with these beauties. 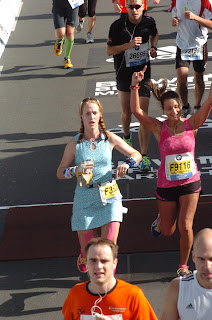 Let me introduce you to the 'What the F, did I just BQ?' look. You'd think I'd be smiling, huh? Well, guess again - apparently I was in shock. 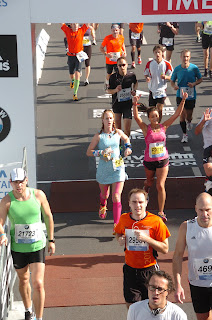 So, I think we could state that - as far as messing up race pics goes - I've reached a new low. ;)

Well done! You are fast! I would love to run one of the big city marathons overseas one day. I hope I get to do that. Nothing wrong with the photos. You just ran a marathon and I think you look very relaxed and good.

Congrats! What an accomplishment! You rocked it.

I don't think there is any such thing as a "slow poke" BQ.

You did manage to mess up the race pictures, but you also managed to qualify! So the hell with the messed up pictures.
Boston, Boston, Boston !!

Well done girl! I never look good in my race photos, except for the one from Zermatt ;) I did my first marathon on Sunday and they took a really good picture of me....walking!!! Shameful! But I too had hip issues ;)

Congrats!!! Good work pushing through that hip pain.
I have yet to master race pics. They always catch me at my crankiest times. :P I love the finish line one here - BQ!? Holy Sh.... :D

Love the BQ shock on your face!

Hi SIlly-Girl,
I was there too pacing my friend Lynne and I have to say that if you are in the 4 hours+ group Berlin is not the place for a PR...but great that you BQ-ed!

They got a great set of pictures of us at the finish..I was very happy with them!

Thank you so much for your post. This post really help me a lot and I have learnt some new things from your blog. I am bookmark your blog for future visit.
pure cambogia slim